A coach's role is to guide, support, encourage. Not always easy! Hands-on, fun exercise to develop skills in safe environment.

This Northgate training activity comes with a licence for repeat use with up to 12 particiapnts per training session within your organisation. Please ask for a discount for use with larger groups.

A common fault of would-be coaches is to ‘know’ what needs to be done and then ‘tell’ a person how. In fact a good coach needs more subtle skills – an ability to listen, show empathy and not be judgmental. A coach is not all-knowing nor the ‘expert’.

In this activity, carried out in threes, one person is coached in a unique but simple counting system that uses wooden blocks. A second person, acting as coach, is there to help but under strict guidelines. He/she, for example, cannot touch the blocks. A third person, the observer, checks that rules are followed and notes what happens.

Can the coach actually keep their hands off the blocks, perform a true coaching role and guide the person to a full understanding of the counting system? To many people, coaching doesn’t come naturally – but it’s easier once you know how!

Divide the group into threes – a coach, an individual to be coached and an observer. With odd numbers drop the observer.

Before the coaching session starts ask all coaches to form one group, all individuals a second group and all the observers a third.

Issue each group with the appropriate Brief. Allow time to read, discuss and plan for their particular roles in the coaching session.

Near the end give each observer a Test Numbers card to test the success of the coaching session.

Form the groups back into plenary and discuss what happened in each coaching session. List the key learning that emerged.

Issue the Key Points Handout to consolidate the learning.

Thank you - it worked really well. The art of asking questions rather than telling and active listening really came out well in the reflection part.

I love 'Coaching and Mentoring'. It perfectly balances the need to know if someone is being trained, coached or mentored and the challenges that come with trying it for the first time. So difficult to not give direct answers on this which is a great practical activity. Have run it with up to 24 before (2 sets), and worked really well. I have participants who talk to me months later still having nightmares about invisible black blocks! A great learning experience with some fun along the way. 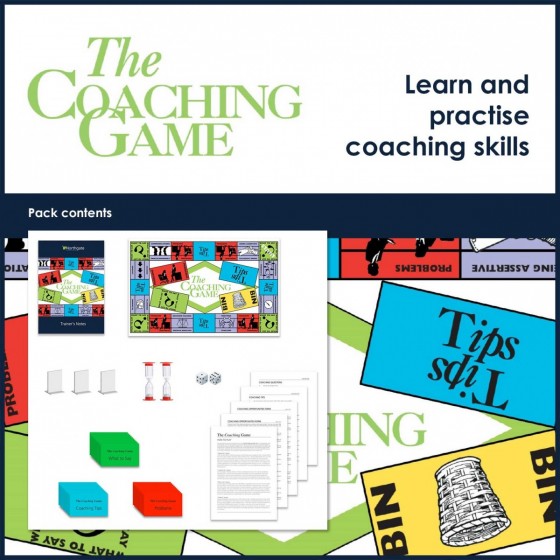 Basic introduction to what coaching is all about. Learn fundamental skills and put theory into practice in a safe environment.